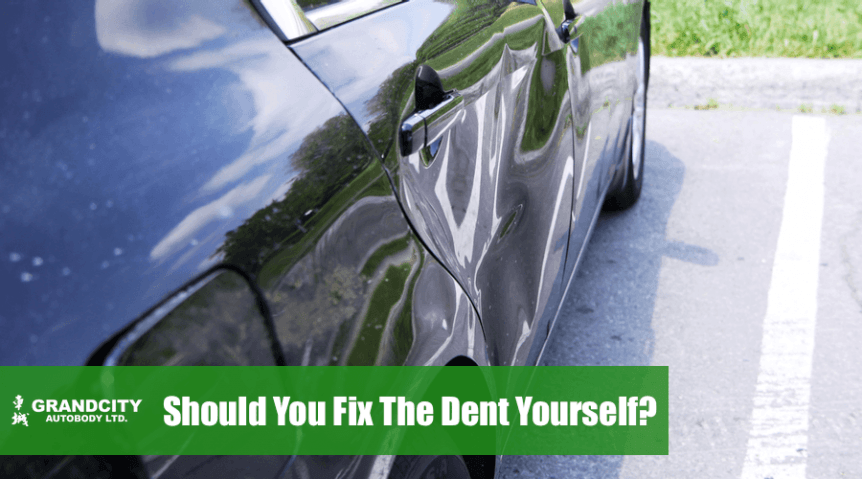 One of the realities of driving in a city like Vancouver is that your car or vehicle will probably get dented at some point. With the crowded streets and parking lots that cram as many vehicles as possible, dents almost seem inevitable.

If you are in the unfortunate position of finding a dent on your car or truck, there are several options you have to fix it. One question that many people wonder is: should I fix that dent myself?

DIY car repairs come with several pros and cons. It is usually best to take let car technicians deal with damage, but not in certain cases, experienced car owners might want to attempt the job themselves.

Here is what you need to know about DIY dent repair.

There are two kinds of dents repairs: paintless and conventional. The names basically imply what happens — paintless dent repairs do not require paint touch ups and typically deal with small dents. Conventional dent repairs, on the other hand, refer to fixing larger dents and will require the damaged area or panel be repainted.

Without the proper know-how, however, using a store purchased dent repair kit might end up doing more harm than good to your vehicle. This can cost you more in the long run since you’ll likely end up bringing your car to an auto body shop in Vancouver anyway.

While you might think that you can save yourself some money by doing the job yourself, consider this: If the dent is small enough to fix at home, it likely won’t cost that much to bring it to a professional.

If you decide take a small dent into an auto body shop, the process will involve a technician using tools like metal rods and body picks to push dents back out. Glue may be used to push the dent out. Then, high and low points will be tapped into place.

If the dent is large, conventional dent repair will likely be needed, performed by an experienced technician. The auto body technician will determine how to proceed on a dent repair based on the make and model of the vehicle, as well as the size and location of the dent.

In this case, the technician will approach the dent one of several ways. They might use a heating agent and a rubber hammer to press the dent out from the inside out, or they might need to replace the entire panel, depending on the dent’s severity. The cost of repairing a large dent is difficult to predict, since the price will vary based on a wide range of factors like the age of the vehicle, the size and location of the dent, whether there is a custom paint job, and on and on.

Wanting to repair a dent on your own is understandable, since the price of fixing a dent can be costly. And for a person with a lot of experience, the right tools and the proper knowledge, repairing a dent at home might be a good option.

However, if the dent is large or if it affects the structural integrity of the vehicle, it is best to bring it to an auto body shop where a licensed and experienced technician can assess the damage and repair it properly.

Hopefully, you’ll never have to deal with a dented car. But if you’re driving in a city like Vancouver, it might be hard to avoid. Stay safe out there!